Swedish culture in America often feels limited to minimalist furniture superstores and meatballs, but in fact, the Scandinavians have contributed the term and ideals behind Ombudsmen, an occupation of those who serve American society every day. Ombudsman—the name and the job—flies under the radar for most, but once people learn of their work, it’s hard to forget. So what is the life-changing work they do, and why haven’t you heard about it? And what’s the deal with that name? We have answers to those questions and many more this month from one of our Ombudsmen, Ed Hopple. 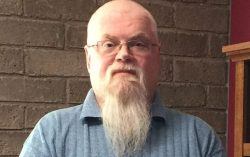 “Before becoming an Ombudsman, I had no idea what an Ombudsman was or did or that there was even a need for them,” says Ed, who now has nearly a decade of experience under his belt. “Our service is vital to residents in long-term care. We are advocates for them. Oftentimes, these residents don’t have family or friends who can speak up for them, so we become their voice.”

The term Ombudsman has some variations, but it primarily means citizen representative or one who speaks on behalf of others. At Legal Aid of West Virginia (LAWV), our Ombudsmen work with residents in nursing homes, assisted living facilities, residential care communities, and legally unlicensed homes. It is their duty to ensure residents’ rights are upheld and each resident has an advocate by their side.

“The residents are our clients. We get our directives directly from them,” Ed says. “Even in cases where two or more residents have issues with each other, we are the advocate for all of the residents. In those cases, we often mediate the issues between residents. Another important aspect is that we are given the opportunity to empower residents to advocate for themselves.”

Ed is officially a member of our Morgantown office, where he serves five counties and a potential 1,876 long-term care residents if facilities are at capacity. LAWV Morgantown has an office for Ed, but the nature of his job means he doesn’t get to sit at a desk all day. Ombudsmen physically visit the facilities they cover, so Ed has become an expert at working out of his car: checking voicemails and emails and attending meetings by phone.

With all the remote (and downright transitional) work Ed needs to do, he has developed a reputation with other Ombudsman as being the go-to tech guru. He keeps up with new software that can better his ability to serve long-term care residents from a mobile “office,” and he is not afraid to share his discoveries and passion for technology with his team.

“For the last several years, I have developed and maintained our Ombudsman Share Point website, which is basically a document library and other resources for our statewide Ombudsman program. I am the ‘tekkie’ of our group. I assisted with the development of our own Ombudsman Case Management program, and I am currently assisting with the development of a new version.” Ed also presents technology solutions to all LAWV staff during large group trainings.

When he is not traveling for work, Ed is a self-proclaimed “home body,” so he loves to get crafty and artistic, read, and play video games. His wife, Shelley; daughter, Emily; son-in-law, Jacob; and his three pets are also a huge and important part of his life. When Emily and Jacob got married, Ed made her bouquet and has even donated arrangements to local fundraisers. You can see an example of Ed’s arrangements in the images below.

Ed and his fellow Ombudsmen are dedicated advocates, even though they might not be attorneys. “LAWV provides important and vital services to a wide variety of clients. Obviously, we provide legal services, but we also provide services to residents in long-term care, residents in psychiatric facilities, and children and adults with disabilities in the community,” says Ed. “In most instances, if LAWV didn’t exist, our clients wouldn’t be able to find OR afford services like ours.”

Now that you’ve gotten one of our Ombudsmen, here are some examples of the crucial work they do with long-term care residents, as told by Ed.

Finding “Home” for a Client

The resident had no hope of ever leaving, and it seemed very unlikely that she would ever regain capacity to make her own medical decisions. One day, the resident was sent out to a hospital for a stay. While at the hospital, she was re-evaluated for decision-making capacity and regained it.

I will never forget the phone call from the hospital social worker and the resident stating that she had her capacity back and wanted my assistance to help her move to another nursing home. I met with the resident and hospital social worker, and we quickly devised a plan on getting her to another nursing home of her choosing. I am happy to say that we were successful, and she was thrilled!

Setting Boundaries while Breaking down Barriers

I remember leaving the facility that day, getting to my car, and crying. I felt like a failure. As his Ombudsman, I had to go back and continue to work with him. Over time, our relationship has evolved, and we have come to an understanding of what I can and can’t do for him.

A rewarding experience I’ve had was working with a resident who was legally blind, had strict religious food restrictions, and yet was very independent. As her eyesight worsened and neuropathy in her fingers got worse, she was having difficulty in checking her blood sugar levels. The nursing home wanted to take that independence way from her due to a safety issue.

I was able to find a new device that the resident could use to prick her finger and get the blood sample independently and still maintain safety protocols. This resident also wanted a power wheelchair but didn’t have the funds to purchase one, as they can be over $1,000. She asked for my assistance again, and I found a couple of agencies that could be possible funding sources, but she still wouldn’t have enough money. This
resident became her own best advocate and found a funding source on the other side of the United States that gave her all but a $1-200 that she needed. She later arranged to have a furniture company donate a recliner to a resident across the hall from her. She continued to be an advocate not only for herself but for her fellow residents.