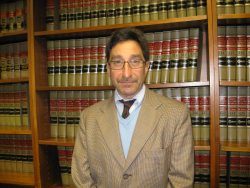 Originally from Dayton, Ohio, Andy Nason came to West Virginia in 1979 to work for the Charleston Legal Aid office, covering Kanawha and Boone County. While he was a staff attorney, he represented clients in domestic cases, had a WV Supreme Court appeal accepted, represented a community group that attempted to have Rand, WV incorporated, and was available to Daymark to counsel their clients. He left Charleston Legal Aid in 1981 for private practice, and in 1983, Pepper and Nason was formed.

Andy has remained an active and dedicated supporter of Legal Aid with volunteering his time, being on the West Virginia Legal Services Plan Board in the 90’s and serving as a Legal Aid of West Virginia (LAWV) Board member since the merger into a statewide program occurred in 2002.

“Andy is what every nonprofit looks for in a leader,” says LAWV Executive Director, Adrienne Worthy. “He’s incredibly generous. He talks the talk and walks the walk through donating regularly of his time and money.”

Andy is widely considered an expert in bankruptcy, serving as the past Chairman of the Bankruptcy Committee of West Virginia, and offers pro bono assistance for LAWV in bankruptcy cases where the client may not be eligible or limited staff simply cannot offer advice. He has also been counsel in hundreds of domestic relations cases and notably represented the debtors in the Monterra Development case, resulting in a payout to all creditors in excess of $20 million. Since 2001, he has been recognized annually by “Best Lawyers in America” and frequently speaks at seminars on bankruptcy and divorce across West Virginia.

When it comes to legal aid, he brings his expertise to West Virginians who would otherwise probably seek no help for their financial or domestic problems. Andy frequently lends his keen eye to cases where bankruptcy may be an option for clients, and since LAWV doesn’t have in-house bankruptcy experts, Andy has become a speed-dial reference for financial law. On average, Andy takes five to ten pro bono cases per year from LAWV, and the pro bono staff consider him a blessing. He has also committed his time to the Lawyer in the School program, along with younger attorneys from Pepper and Nason.

“I feel honored to be associated with Legal Aid of West Virginia,” says Andy. “I am impressed by the staff’s dedication and impressed with its reputation in our state’s legal community. I was fortunate to end up with the Charleston Legal Aid office out of law school. I was lucky to work with so many fine people from whom I learned so much about being a lawyer.

“Anything I give back does not repay what I took away from my time as a Legal Aid lawyer. Providing individuals a voice and assistance to help solve problems is a high calling; to do that for individuals who have disadvantages, whether for financial or other reasons, is a higher calling.