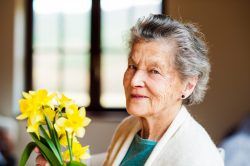 Judith values her independence. She tries to do as much as she can for herself, but her age and disability—Judith is legally deaf—has meant she needs just a bit more assistance in recent years. Her son, Barry, moved in with her in 2014, which Judith thought would be a nice chance for him to help around the house and keep the loneliness at bay. Barry and Judith’s relationship has never been perfect, but, she thought, relationships with your children are always complicated.

It wasn’t long after Barry moved in that the cracks began to show. The housework Judith thought Barry would help complete quickly fell onto her shoulders once again, both physically and financially. Barry sometimes did do the shopping, but he was always sure to take Judith’s bank card to make all the purchases. Soon, expenses that didn’t benefit Judith at all began showing up. She started setting aside cash for Barry to use instead, but he would always find and take her debit card not long after the cash ran out.

Judith finally decided to tell Barry he needed to stop using her debit card because she was on a fixed income, Barry reacted violently. He beat Judith, forcibly took her cash and bank card, and stormed out of the house. This cycle continued; Judith was being beaten regularly, and Barry was spending down their household income as soon as it was deposited. On top of her deteriorating physical health, Judith was still trying to manage taking care of her home. She didn’t want to leave.
One day, Barry beat Judith so severely, she started bleeding and couldn’t get it to stop. Her daily aspirin regiment was necessary for her health, but it worsened her bruises and cuts. Judith didn’t drive and had to ask a neighbor for a ride to the closest domestic violence shelter. When she arrived, they were horrified to see her condition—even more so when they learned it was her own son beating her so severely.

The shelter reached out to Legal Aid of West Virginia (LAWV), where two staff attorneys used their collective expertise to secure a domestic violence protective order and LAWV’s first ever permanent financial exploitation protective order. LAWV’s attorneys also counseled Judith on the criminal proceedings against Barry, who entered a plea for assault and battery.
Because of the quick action taken, Judith is living at home again, and she is being supported by other family members who were alienated by Barry’s overbearing and abusive behavior. Judith has control of her finances again and doesn’t have to worry about Barry’s violence further damaging her health. “Every day is a gift, and I feel like I am truly able to celebrate my life again,” Judith wrote in a note to her attorneys. “Without your help and the folks at the shelter, I don’t know where I’d be.”